Black Studies Doctoral Theses Under Attack – WHAT NEXT?

Posted on August 28, 2012 by discoverblackus

When Naomi Schaefer Riley penned her post “The Most Persuasive Case for Eliminating Black Studies?  Just Read the Dissertations.,” I thought to myself, “what on earth is she thinking?”  In the piece which ran in The Chronicle for Higher Education’s Brainstorm blogon April 30, 2012, Schaefer Riley, who is White and 30-something, breezily dismisses the topics selected by five Black Northwestern University Ph.D. candidates as “a collection of left-wing victimization claptrap.   The best that can be said of these topics is that they’re so irrelevant no one will ever look at them.”

Naomi Schaefer Riley, the former blogger for the The Chronicle of Higher Education, questioned the relevancy of black studies doctoral programs.

Schaefer Riley’s post was in reaction to Stacey Patton’s Chronicle of Higher Education article in an earlier edition, “Black Studies:  Swaggering Into the Future.”  The article discussed the topics and methodology of the 21st century Northwestern University Black Studies scholars who use an interdisciplinary approach for their theses on the history, culture and politics of race.  They are among the first group of Black Studies doctoral candidates in the Northwestern University program which began in 2006.

The Ph.D. candidates’ dissertation topics run the gamut from Black mid-wifery to Black Republicanism to the Black housing crisis.  All of which struck the conservative-leaning Ms. Schaefer Riley as “irrelevant and partisan.”

I was at Hampton Institute (now Hampton University) when the students, like so many across the country, protested.  At Hampton, we demanded student representation on the Administrative Council, the Board of Trustees, and the expansion of the curriculum to include courses on the Black experience.  Our collective voices were heard when we occupied the President’s Office for a few days.

After threats of sending in the local police, we vacated the building and the administration closed school and cancelled graduation leaving students scrambling.

The amazing thing about Schaefer Riley’s post was that she admitted that she had only read the titles of the dissertations and blurbs on each, and based her unsubstantiated blog harangue on that little bit of research.  As for her rationale for not delving deeper into the material, and I quote, “it is not my job to read entire dissertations before I write a 500-word piece about them. I read some academic publications (as they relate to other research I do), but there are not enough hours in the day or money in the world to get me to read a dissertation on historical black midwifery.”

The blogosphere lit up with arguments involving respected scholars, annoying  bandwagon jumpers-on, and folks who just like to read their own posts about whether or not Schaefer Riley was a racist, just plain ignorant or exercising her right to scholarly critique.   After a lot of back and forth, the Editor of The Chronicle, who initially invited readers to debate the post, subsequently fired Naomi Schaefer Riley after 6,500 signatures were collected on an Internet petition calling for her dismissal.  The Chronicle stated in an email that Schaefer Riley did “not meet The Chronicle’s basic editorial standards for reporting and fairness in opinion articles.”

The importance of the Naomi Schaefer Riley brouhaha is that it is an indicator of a larger trend that is happening not only in higher education, but in other aspects of our culture, to diminish the African American experience or make it irrelevant.  The campaign to suppress voters’ rights by states is reminiscent of the poll taxes and literacy tests instituted by states to prevent Blacks from voting in the 50s and 60s. 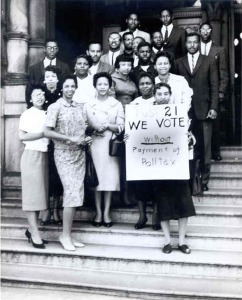 The increase in racial profiling incidents, especially in the ‘stop and frisk’ operations by local police, is a reminder of the days when the enslaved were required to carry a pass to leave the plantation unless accompanied by the slave master or overseer.  The abandon with which some media members stir the embers of racial dis-ease by providing a platform for the crazy bigots is an indicator of a revised narrative on the horizon similar to the narrative that was constructed during slavery that labeled African Americans as ignorant, lazy and dangerous.

History does repeat itself, but it doesn’t have to if we remind folks when they start up that road again to injustice, inequality and just plain ignorance, that we have traveled that road before and we have changed that story.  So, we must be vigilant of the Naomis of the world and hold their feet to the fire when they ridicule and question the legitimacy of Black Studies, and by extension our history.  We have to query their credentials and their motives.  But most of all, the Schaefer Rileys need to be held to a higher standard when they put themselves out there as arbiters of critical analysis on any topic.  Shoddy research on a topic that is so important should not be tolerated and because folks were paying attention, it wasn’t tolerated.

5 Responses to Black Studies Doctoral Theses Under Attack – WHAT NEXT?