Cleveland, Ohio: The Best Location in the Nation

Posted on October 11, 2011 by discoverblackus

We traveled to Cleveland, Ohio this past Labor Day to attend numerous events celebrating family and friends and my husband’s 45th high school reunion.  When he was growing up in Cleveland, it was known as “The Best Location in the Nation.”  Times have changed and although that slogan isn’t used much anymore, Cleveland is still alright.  I’ve been to Cleveland about five times in the last fifteen years and have witnessed the changing landscape of an urban city trying to be relevant in a 21st century world.  But I never really knew its history.

On my first visit in 1996, the urban decay was overwhelming, especially on the eastside of Cleveland where the African American community resides.  Abandoned houses that were ghosts of their former arts & craft architectural glory were falling apart, sloping roofs, peeling paint and crumbling exteriors.

Two-family wooden-framed houses with porches that graced the façade of the formerly elegant homes longed for a happier time.  Trash-strewn vacant lots connected barren landscapes where empty buildings stood in defiance of their certain demise. 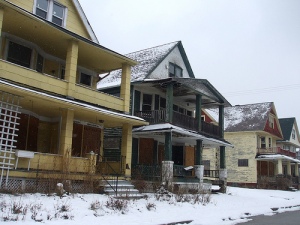 Small businesses that serviced neighborhoods – the mom and pop grocery stores, drugstores, barbecue joints, liquor stores – had died a slow retail death.  The Haltnorth Theatre, a neighborhood movie house at Woodland Avenue and East 55th, once a place where young black kids from the Outhwaite Projects, across the street, wiled away countless hours watching grade B double features like The Blob was no longer there.

African Americans have been in Cleveland since the early 1800s.  Settling mainly on the eastside, they worked as unskilled laborers and domestics, but several of these new arrivals became successful businessmen and political leaders, like Madison Tilley.  A former slave, Tilley was “an excavating contractor with 20 wagons, 40 horses and an integrated workforce [that] at times numbered 100,” according the Encyclopedia of Cleveland History.  Tilley became one of the five African Americans owning property in 1840 and when he died his estate was valued between $25,000 and $30,000.

More Blacks passed through Cleveland from the 1830s to the 1860s on the Under Ground Railroad (UGRR) on their way to Canada.  University Circle, now a thriving cultural and academic center, was at the heart of the Abolitionist activities in Cleveland.  John Bell, a Black barber, owned a barber shop that became known as the last stop on the UGRR for many fugitive slaves escaping by boat across Lake Erie to freedom in Canada.  There were some whites who were sympathetic to the plight of fugitive slaves and assisted Blacks traveling on the Under Ground Railroad. 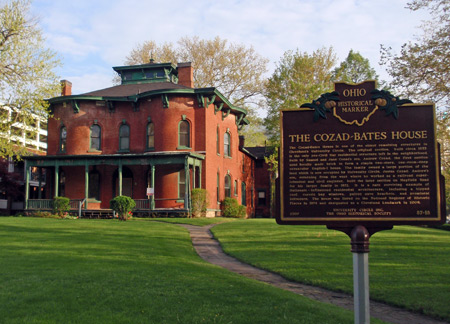 During my visit to Cleveland this time, I noticed that something was different.  As we toured the eastside looking up old addresses of grandmothers and tracking down familiar haunts of days gone by, the trash-strewn lots were now empty green spaces.  Gone were many of the boarded up structures. 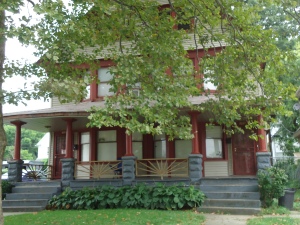 Grandmother's house today located on the eastside of Cleveland, Ohio.

Although the areas we visited had not been redeveloped, they looked expectant, like something was going to happen.  Traveling down Kinsman Road into Shaker Heights, I noticed that construction on a strip mall had been completed since the last time we were in town in 2006, leaving the original retail stores across the street empty.

Shaker Square, the historic gateway to the Shaker Heights Community with its quaint Colonial-Georgian brick buildings accented in white wooden facades arranged around an octagonal town center, has seen better days, but it is surviving.  The Colony Theatre is still there, but its name has changed to Shaker Square Cinemas, and has expanded to 6 screens. 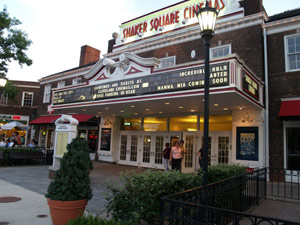 Shaker Cinemas on Shaker Square is now a multiplex.

Now CVS, keeping up with the times, has taken up residence in the retail hub.  The surrounding community of beautiful old apartment buildings on tree-line streets is still well-kept.  The difference is young African Americans can be seen strolling the streets and eating ice cream and snacks from the local boutique shops around the square.

Cleveland has a lot to be proud of because of the contributions that so many African Americans have made to science, technology, sports, politics, and the arts. Garrett A. Morgan, inventor of the gas mask and traffic signal, moved to Cleveland in his early 20s and worked as a sewing machine repairman.  He received national attention in 1916 when his gas masks were used to rescue workers trapped in the tunnels under Lake Erie. Morgan also started the Cleveland Call in 1916, a Black newspaper that merged with the Cleveland Post in 1929 creating the Call and Post.  Jesse Owens, another Clevelander, was an amazing track star who attended East Tech High School and won 4 gold medals at the 1936 Olympics in Berlin.

Carl Stokes, the first African American Mayor of a major U.S. city, and his brother Louis Stokes, a member of the U.S. House of Representatives, grew up in the Outhwaite Projects. 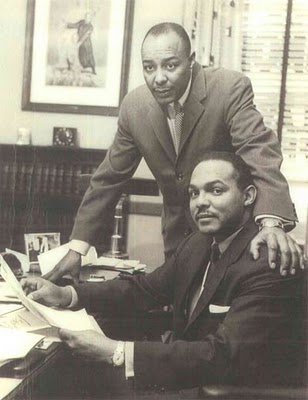 Louis (standing) and Carl Stokes (seated) were raised in the Outhwaite Projects and went on to become a U.S. Congressman and the first African American Mayor of a major U.S. city, respectively.

Their contributions to local and national politics were immeasurable and occurred when African Americans were seeking their equal rights as Americans.  The Phillis Wheatley Association, named for the first published African American poet in America, opened in 1927 in Cleveland; it was originally an agency that provided safe housing for Black women relocating to the North during the Black Migration and is now a multi-service organization serving the Black community.  Eliza Simmons Bryant spearheaded the founding of the Cleveland Home for Aged Colored in 1896 after discovering that many of the elderly Blacks who migrated to Cleveland needed a place to live.

Karamu House, a settlement house founded in 1915 by two Oberlin students, is still in effect today as an arts center focusing on the arts and culture and has historically been a “magnet for African American artists.”  Author Chester Himes, who wrote mysteries and crime novels, grew up in Cleveland and used his experiences as the basis of many of his books.  Himes’ two Harlem Detectives – Coffin Ed Johnson and Grave Digger Jones – made famous by Raymond St. Jacques and Godfrey Cambridge in the film, Cotton Comes to Harlem were characters from his novel.  Directed by Ossie Davis, the film is a perennial favorite.  Actresses Ruby Dee and Halle Berry are from Cleveland and Langston Hughes lived on the eastside in 1917 while attending Central High School where his budding writing career was encouraged with the publication of his works in the school’s magazine.

Looking at Cleveland through a historic lens this time around has been extremely helpful for me as an observer of people, places and events.  I have a greater understanding of the challenges that Black Clevelanders had to overcome in their pursuit of a better life, which on some level is a story that everyone can relate to.  So, it is true, you can go home again, even if it is someone else’s home.

4 Responses to Cleveland, Ohio: The Best Location in the Nation